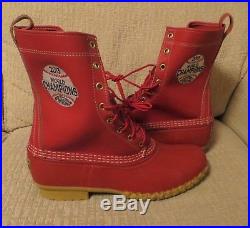 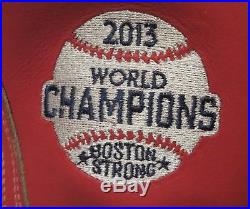 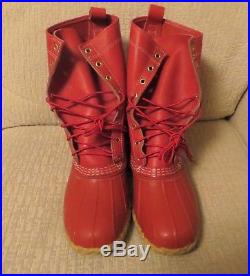 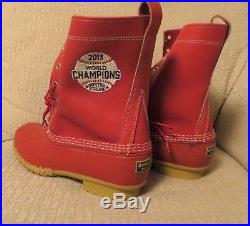 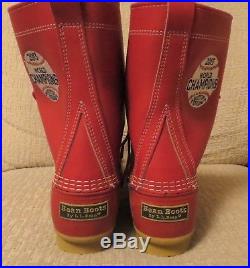 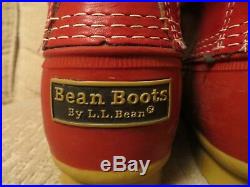 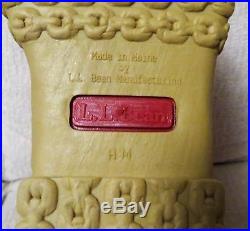 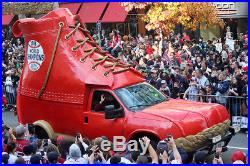 A SPECIAL GIFT ONLY FOR PLAYERS AND COACHES. An exclusive gift for any Red Sox fan or collector. As rare and exclusive as the championship rings. FROM THE 2013 RED SOX CHAMPIONSHIP SEASON. MADE ONLY FOR THE RED SOX PLAYERS AND COACHES. ONLY 1 FOR EACH PERSON. ONLY 60 PAIRS EVER MADE FROM L. BEAN PROMISED TO NEVER MAKE ANY MORE. EACH PAIR MADE FOR A CERTAIN PLAYER. These came right from a Red Sox coach. ONLY PAIR EVER FOR SALE!! BRAND NEW – NEVER WORN. SIZE 10 – ADULT. DON’T MISS OUT!! YOU WILL BE THE ONLY ONE WITH THESE. PICTURE 2 – IS JONNY GOMES PUTTING THE WORLD SERIES TROPHY ON THE FINISH LINE OF THE BOSTON MARATHON, WEARING THE LIMITED EDITION, PLAYER ONLY LL BEAN BOOTS. PICTURE 11 – JONNY GOMES WEARING THE BOOTS ON CONAN. CONAN COMMENTED TO WANTING A PAIR, AND HE SAID THEY WERE NEVER GONNA BE FOR SALE. PICTURE 12 – L. BEAN Bootmobile painted just like this boot…. Driving in the Duck Boat Parade in Boston Ma. For the 2013 World Series Champions. EVERYBODY WANTED THESE BOOTS. AND THEY HAVE NEVER BEEN AVAILABLE FOR SALE. HERE IS YOUR CHANCE…. THESE CAME FROM A RED SOX COACH FROM THE 2013 WORLD SERIES SEASON. ONLY 60 PAIR MADE FOR THE PLAYERS AND COACHES. PROMISED NEVER TO SELL THEM TO THE PUBLIC. SUPER RARE – VERY COLLECTIBLE. YOU WILL NEVER SEE ANOTHER PAIR FOR SALE. THE PLAYERS KEPT ALL THERE PAIRS – THEY WERE MADE SPECIAL FOR EACH OF THEM FROM LL BEAN. Red Sox outfielder Jonny Gomes. Has become a trendsetter in his first season in Boston. From his beard, tattoos, army helmet, Oakley goggles and red robe, Gomes has many fans sporting the same garb. He also introduced his L. Bean Red Sox red duck boots on the day of the teams rolling rally Saturday. His boots, shown in the photo above, have a logo of a baseball that reads: 2013 World Champions. Gomes has been wearing them around town. He wore them to the Patriots game on Sunday at Gillette Stadium, and again during his visit on the “Conan ” late-night show Tuesday. Fans are going crazy over the boots, but they won’t be made available to the public. Steve Fuller, the chief marketing officer for L. Bean, responded to a tweet asking if the boots would go on sale. “We’ll never sell those exact boots, ” he said. There were only about 60 pairs designed for the Red Sox and Fuller says he made a promise never to sell. Bean Corporate Partnerships: We’re thrilled that the Red Sox won the World Series. We’re diehard baseball fans and partners with Fenway Park, so we couldn’t be more excited to have the Red Sox bring home the win right here in New England. We felt we had to do something to commemorate such a spectacular season, something to express our thanks and say “Congratulations”, from one New England institution to another. So we came up with something we can give the Sox that nobody else can, something uniquely L. Bean and uniquely New England: Special red L. Bean Boots with a commemorative World Championship logo. These extremely limited-edition 2013 World Championship boots were created by our expert bootbuilders in Brunswick, Maine, designed and sized specifically for the Red Sox players and staff. It’s our way of saying “thanks” for all the Fenway memories, to each and every member of the team. 2013 BOSTON RED SOX WORLD SERIES LL BEAN BOOTS. SIZE – ADULT 10 – NEVER WORN. HAS BOTH PAIRS OF SHOELACES ALSO. THESE CAME OUT IN 2013 AND ARE MINT – NEVER USED. They will not issue anymore of these in the future. This is your last chance to get these. EXTREMELY RARE AND HARD TO FIND! No longer produced, great collectors item. The item “2013 RED SOX WORLD SERIES LL BEAN BOOTS BOSTON STRONG MARATHON 2018 CHAMPIONS” is in sale since Monday, March 18, 2019. This item is in the category “Sports Mem, Cards & Fan Shop\Fan Apparel & Souvenirs\Baseball-MLB”. The seller is “uswillsmith” and is located in Hanson, Massachusetts. This item can be shipped to United States, Canada, United Kingdom, Denmark, Romania, Slovakia, Bulgaria, Czech republic, Finland, Hungary, Latvia, Lithuania, Malta, Estonia, Australia, Greece, Portugal, Cyprus, Slovenia, Japan, China, Sweden, South Korea, Indonesia, Taiwan, South africa, Thailand, Belgium, France, Hong Kong, Ireland, Netherlands, Poland, Spain, Italy, Germany, Austria, Bahamas, Israel, Mexico, New Zealand, Singapore, Switzerland, Norway, Saudi arabia, Ukraine, United arab emirates, Qatar, Kuwait, Bahrain, Croatia, Malaysia, Brazil, Chile, Colombia, Costa rica, Panama, Trinidad and tobago, Guatemala, Honduras, Jamaica, Viet nam, Uruguay.